EXTRA LONG! YOU HAVE BEEN WARNED!!! (with pictures!)


first of all, to prove that it's me and not my army of monkeys from uz-beck-istan, here's a recent photo of me.

who care's if it's blurry and you can't tell that it's me? You can tell all my distiguishing features!

tiny eyes, freckles, cheekbones like I was caught sucking on a straw when I was young and the wind blew in and made it stay that way. and green. of course.
****

Today someone told me he thought I was innocent.

So I asked him why...and he was like...well, your glasses, the way you look, you're always smiling, and you're so friendly....

in the immortal words of Britney, I'm not that innocent!!!


Apparently the forces of evil in the comic book are all some kind of sexual deviant or another. ( I can't seem to make this sentence grammatical and I can't be bothered trying)

He's further er, fleshed out my part (no news on my name yet)- apparently because of my pimpin' faux fur super-short cut jacket and of course, my RAVISHING GOOD LOOKS. *cough cough cough*

my superpower it seems, is "sex". 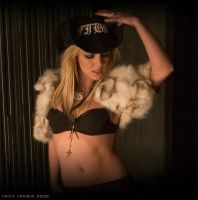 you can't argue with that jacket now can you. (Britney is fair game however)

Of course, I look a whole lot more INNOCENT in that jacket.


what an irony considering I am probably the store's most celibate staff member.

Maybe that is the secret of my IRRESISTABLE SELF.

so I charm the pants *cough cough* off everyone while maintaining my halo! Ta-dah!

actually, with regards to my irresistability, I have a complaint to make. From attracting dodgy men, I seem to now attract NO MEN. This is sad. Although I prefer this situation to the dodgy situation.

Maybe it's because I've moved workplaces. Along with no more crazy racist druggies trying to strangle me, I also lost shoplifting drunk midgets trying to pick me up.

Lately, I've been trying to pick up quotes off everyone here, because I want something to remember everyone by, and I have a crap memory. If I make an effort to actually remember funny things they've said, or stuff that's "SO (insert name of person)" then I can actually remember the person so much better.

Alaia is always asking for more pics, so in a belated birthday pressie to her,

The month of June shall be PICTURES MONTH!!!!

Anyway, here are some funny funny quotes so far (to me anyway)

"But myst, boys are delicious!' - after my friend cross-examined me about why I'm still single. AGAIN.

'you're like Bree from Desperate Housewives...go into the toilet, scream for 5min and come out and EVRYTHING'S FINE. JUST FINE' - gerri, on my stress-coping tactics and how I seem to 'stay so calm'


'Yeaaaah. The speed gets me up, the valium keeps me down, We Don't Eat At ALL. OH NO' - White Trash in response to a customer who was convinced none of the staff eat

'Have you seen that episode of Simpsons?' - White Trash

'she'll get the order wrong!' - English Rose on my cousin,

'you can live downstairs, I'll live upstairs. we'll stock the master bedroom with clothes from Savers'

Nanh and Jen, fighting over who wants to marry me.

'but Asian women are evil' - The boss.

'I had this dream about you last night. you me and linda owned a shop together, and we lived upstairs. but even though we owned this shop, linda used to make us get up at 7am every morning to open the shop anyway' - white trash on her subsequent dream about me- following the one she had about me living below work in a hobbithole.

'Furry Dice!' on what to get Linda

'YEAAAAAH. Do you know how to screw a lightbulb with one hand and pat the dog with the other?' - Harveen and Anika to Gordon, my extremely shocked (gay) lecturer umut and derek - wanna be communists hall is TOO CUTE. so is ying. One of my dad’s many cousins has rejected the illustrious lineage of the family (professors, lawyers, doctors, the occasional knight of the order and whatnot) and become a cook in Melbourne.

In fact, he owns a small takeaway joint in a very posh suburb and does home deliveries.

During one of my group meetings, I had to go down to that suburb and found out that my teammates MissSunshine and EnglishRose regularly get takeaway from that joint.

For dinner we then rang him up and ordered delivery. After MissSunshine hung up she turned to me.

“There was this really little voice on the phone. I mean, it was really professional and all that, but it was little. Like it came from a little girl”

“That’s because it did. That was my second cousin. She’s about 7…maybe 9”

English Rose can’t decide if I’m joking or not. The look on her face was priceless- like she couldn’t decide whether she wanted to start lecturing me on child exploitation or to laugh at my joke.

Actually, I’m only half joking.

I realised this a long time ago, that there was something fundamentally different in the way children were so highly prized in Western culture.

I mean, we can wax lyrical about how they are ‘little emperors’ in China and ‘little treasures’ everywhere else, or we can quietly compartmentalise them as the more kids the merrier. More to look after the parents when they’re old, more hands to help out in the home and at work.

You know, slaving over the looms making precious Persian handmade carpets and all your sneakers. Or picking your antioxidant packed green tea.

Sure. But even in those circumstances and everywhere in between lies something about Asian children.

They’re just not…sacred. Children may be spoilt, the child the parents’ heaven and earth, but they’re not…almost godlike.

It’s been branded into Western (and by default Christian) culture- that there is no innocence like a child. That everyone should aim to be childlike in their innocence and trust. And that it’s a sacred thing, this childhood.

And it’s something every child should have. A childhood.

But even while Asian parents are spoiling their kids rotten, they’re packing them off to ballet/tap-dancing/piano/violin/speech and drama/deportment/modelling classes. Self-actualisation seminars, Superkid camps. The works.

Why? Well, it’s a classic case of using kids for one-upmanship.

You Jones, Me Better.

And of course, we beat kids. Let’s not even get started on this one, but in general, if Asian kids are naughty, then we get beaten.

You try beating a Western child, and 60 minutes will be called in, the family courts will be after you, and the kid him or herself will be threatening to call Kids Helpline.

Watch Russell Peters’ segment on childhood beatings and laugh your head off because it’s so true. ("White people, BEAT YOUR CHILDREN." man. I crack up every. single. time.)

Western kids on the other hand, are meant to have a childhood. Do what they want, have time to play, blah blah blah. You know, roll around in green grass, get all muddy, and because they smile ONCE at you, you’re supposed to forgive them.

That’s why kids are used so much more in Western advertising. Kids here are talked to. Not talked at.

And while everyone knows about how ‘women and children’ are meant to leave first in an emergency, the reality doesn’t really hit.

“Children hurt” is often used as a headline. This used to amuse the crap out of me.

Instead of “47 people were hurt in an accident” it would be “11 children hurt”. I never saw it as a drawcard to buy the paper.

And while it’s fairly common to see a kid running to the corner store to get some milk back home in first world Singapore, I remember my shock at seeing an unaccompanied kid turn up and try to pay for milk in Australia when I used to work at a grocery store.

My first thought was “What the hell! Where are his parents! Horrible parents!” Before “Child Exploitation!”

I was so used to parents taking kids out of the car, walking all round the store with kids in tow that seeing a kid grab milk made me jump.

Then I loosened up.

What the hell. They start kids younger than this where I come from.

I used to do this. I used to like it. I most certainly wasn’t being exploited.

And besides, the kid’s mum was in the car waiting right outside the door. What the hell.

I was turning into a stuffy conservative. At 19. (then)

And that’s when I realised that you can take a girl out of Asia, but no matter how banana the girl is, you can never take the Asia out of a girl.

Heh, my American friends are horrified whenever I tell them about how my mum used to buy rattan canes - by the bundle - and then how my brother and I would hide them behind the cupboard under the stairs. Shrug, I think, if I were to go back to Singapore and settle down there, I'd still buy canes. Of course, if I stay on in the US and have kids here, I'd be hauled off to prison faster than you can say my name.

my parents were quite... creative when it comes to finding stuff to flog me with.

now i guess they find it easier on their aching bones to control my behaviour by threatening to a)disown me b)not leaving me any money c)all of the above.

the things people do protect their retirement fund... but i digress.

hehe. i guess times have changed a bit in the west. i copped pleny of smackings as an incorrigibly naughty youngster - though not stuff that would actually leave a mark like a cane. i've never had a problem with physical punishment in itself, but i do think a lot of parents tend to resort to it in anger and frustration, which probably isn't a good message.