my hard drive died, and I'm bumming at a friend's place.

went to hunter valley and had a crazy week. Will update with photos soon. (none of me of course) We worked really hard, but played just as hard. It was good. and the rooms were enormous.

It was crazy mad- including a frog that had a staring incident with me. HAHA.

In the meantime, I thought I'd tell you that I managed to burn myself ironing (yes, yes I know), blister myself making apple pie (charming) and blistered myself a second time bloody alum key turning while putting together a shelf. and I have another to put together this weekend.

I NEED A MASSAGE. oh my poor delicate hands!

Promise to update you all soon. After I wash all that laundry.

I decided to haul my lazy ass in for BodyJam this week, expecting the usual instructor who takes Funk to take us for BodyJam. Turns out an instructor from Richmond came down instead.

I spent the entire lesson giggling as opposed to dancing because I had to learn the QUEENEST dance ever complete with flicks, madonna moves and parting imaginary curtains before clawing in a most seductive-but-disco manner.

If you don't understand what I mean, watch an episode of Queer as Folk.

I'm off to Hunter Valley on work next week. Cheese for Gerri, wine for the house, and Krispy Kremes by the tonne for everyone else. Sounds good?

in case no one gets it, this post is sarcastic

not been online because I don't have a computer. bumming and unceremoniously hijacking friend's comps while they slave over a hot stove.

2 weeks in and I've made so many boo-boos it's a wonder they haven't fired me yet.

yay me. must be my natural charm. that and my unsupassed barista kung-fu.

been cleaning like a madwoman and still receiving bites. it's odd. I'm convinced there's an insatiable evil mosquito on the loose somewhere in my office AND at home, hellbent on making sure I die of blood loss before my PR application can be rejected.

Oh to live on borrowed time and life on the edge. It's no wonder I fling myself out of planes.

AND. I'm still saving up to try and go home in May.

Apart from poochyboyone getting Diesel to pose with bags to send over to bryanboy, we also had PoochNation's launch that I mentioned in the last post.

What you guys don't realise is that I spent most of my time laughing my ass off at them Poochy People because well....ok. Take a look. 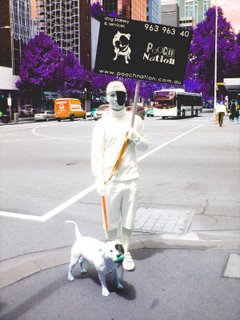 While I was slaving away in 130% office monkey mode, dear old poochyboyone was er, trawling the streets in post-apocolyptic Melbourne with the Pooch Nation sign, and matching dog. What? Who said he was dressed to match the dog? The dog was MADE to look like him! See radioactive tongue? yeah well, we tried to make him keep his tongue where it belonged. He wouldn't listen!
(and now we know for sure, post-apocolypse, the trees will be purple and we'll all have blue-tongued lizard genes) 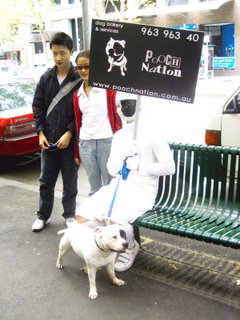 Of course, there were heaps of people staring at him, and sure enough soon enough, the Japanese tourists started flocking.

And we all know that when Japanese tourists start taking photos, they never stop and a queue starts forming. In further proof that China is taking over the world, the Chinese tourists started asking for photos too! Shot #8, Pose #3. 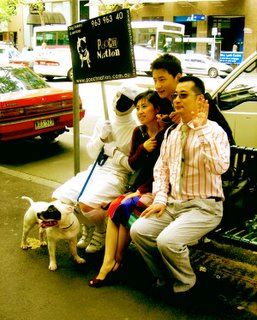 Even the parents decided to get in on the action, "Hi" back to you cool dude with the ray ban sunnies and sad sad outfit.

By the time I was out to lunch, poochyboy was NOWHERE to be seen despite the fact that he claimed he'd walked around my area. (and I'd run out for lunch specifically to see if I could see him and laugh at him while pointing and giggling Asian schoolgirl teeheehee style)
He even had a brush with the law, when a security guard decided to take his name down justincase he was protesting. erm.....sure. ok. We're carrying a giant placard selling services and you say we're protesting. How much more capitalist would you like us to get??? Do we need to put in a "I had 300 calories today, that is so not sexy" statement down the bottom?

P/S I've decided that the "soooo not sexy" line is my phrase of the month, like, that is so not sexy.
Posted by sway at 3:47 am 1 comment:

Keira Knightly has a nomination for an Oscar? WHAT?!?! For Pride and Prejudice???? Double what????

everyone: packed up my mobile by accident when I moved house so I only just read my msgs today. Sorry I couldn't make it for the dumpling party, the job offer celebration, or the steamboat session you guys.

The boys are watching The Jacket outside, but the front bit tortured me so much that I'm in here blogging instead.
Posted by sway at 11:25 pm No comments:

and so ends my 1st 9-5 5day week in a long long time. oof. and yet it's all gone past in a blink. Well, part of that may have to do with poochnation's launch, or the fact that I was homeless and bumming at bryyin and killingculture's place.

I mean, sure, it was more like 8.30-6.30. and once it was even a 7.30-6.30, but it had it's lulls and wasn't GOGOGO all the time. AND. I've already managed to inadvertently insult the boss during a company meeting. I sure have sure footing. I feel like a frog on a lily pad. Only heavy.

and I'm sure that my job description should really read "stalker" since that's all I seem to do.

How do people working office hours manage to run errands? No wonder there's internet banking and Bpay. But when there's bills to be paid, insurance to be done, and tons of other errands to run, how does one fit it in when all the damn shops close at 5pm?? I feel like I'm missing out on some special warp time that every other working professional seems privvy to.

I think I need to apply for a credit card so I can pay for my bills online.

I've also realised how disgustingly healthy everyone is. They're all about salads and detoxes (with 1 or 2 biscuits on the side). ech. me? I'm still scoffing. Not good when I seem to be steadily ballooning.

Met the clients I seem to also have insulted (gosh I'm good), slide. let it all slide. sllliiiiiiiiide.

I'm a short little girl. I can fit into a suitcase (believe me we tried once, they zipped me up, popped me into a lift and sent me down to the ground floor) I can hide for a while.

Watched: Initial D. Jay Chou reminds me of my cousin Smurf.
Posted by sway at 1:04 am 1 comment: