This is no ordinary Risotto. This is duck risotto from The Lounge Bar in The Docklands. 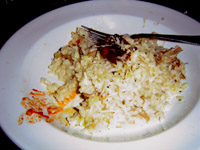 what's so special you ask?

well, it LOOKS like risotto, the menu says it *is* Risotto, but this,

is a true example of looking one thing and being another. 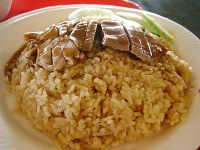 
I was there celebrating my ex-neighbour-in-college's birthday, and there were giant serves of food! The lamb looked like it could be GM given that it was about a quarter the size of my femur (now now, no midget jokes please)

She paid for everything in the end, and we polished off dessert at the gelati place opposite after dinner before taking rides to her place in MURRUMBEENA.

I got a helluva kick watching The Dictator's GPS system TALK. I'd seen GPS systems before (and thought they were the coolest thing ever) but to see it talk was fun and annoying all at the same time.

We got to see her new pad she shares with her fiance and her best friend, and watched her neighbour's cat eat a rat.

It was DISGUSTING. When we were there, it was still literally playing with its food, batting the rat with her paws and the rat fighting back before she simply picked the rat up. EW.

To make us all feel better, we decided to go all girly and see what her engagement outfit looked like and watched Russell Peters before driving home along Princes.

Friday night, Princes Highway. It can only mean one thing.

We were entertained all the way from Murrumbeena to the Chapel St turnoff by Chapel Kids drag racing each other Chapel Style.

The kids line up at the lights, rev, and then start off, but before they even hit the speed limit, they break. The race is over, the competition based purely on acceleration. Well, I lie. They don't hit the speed limit because there are traffic lights.

This may go on for hours, and fights have broken out before. Elite shopping district by day, this place is a car show by (Friday and Saturday) night.

The Dictator chose a safe distance, (we caught up with the racers at every single traffic light anyway since they were staying within legal limits) and we watched with much bemusement.

Here's a modified Corolla, not a good shot, but from our perspective (and the rearview mirror) this one looked like a bug. A blue-eyed bug. 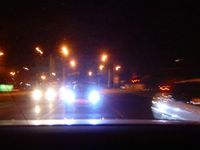 so that was my night in a nutshell. Although I have to say the highlight still is duck rice-risotto.

so now I can officially call myself The Lounge Room duck risotto- I'm an asian everyone thinks is white on the inside, but when you bite in, I'm still obviously asian!

since I can't be an egg because, you know, cholesterol in the yolk and all that.

Duck risotto. Man hat sounds way to rich for me... though I'd like a bite... heheeheh