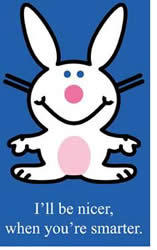 ok. I've been working 7 days a week which honestly, isn't much different from uni days. In fact, it's a sight easier given that there aren't any deadlines, and I don't have to do 2 jobs in one day like I did.

Anyway, I got commendment from the boss in one of the joke prizes handed out at the party last night. I'm an Energiser Bunny- and I scored myself 2 double-a batteries.

at least I'm not punctuality challenged. and they got alarm clocks.

I certainly don't feel like an energiser bunny most of the time, more like I'm swimming through what I should be running past. Like the "Brand X/Eveready bunnies" Too many things to do, so little time. and of course, half the time when at my internship, I feel stupid.

and because of the party last night, everyone turned up with massive hangovers this morning and I spent half of it doling out Napro, the other half dealing with crazy orders from customers. ("I want a flat white in a glass" "I can't drink out of this funny shaped cup, you can't just pour my drink in I wanted in extra hot as well!" "I want the extra light one. THAT ONE." "I just want a normal hot chocolate" *sticks finger in milk jug* this milk is lukewarm. I want it HOT. etc)

so with crazed staff on one hand and crazed customers on the other, and stock that just wasn't appearing....*rings up co-store* "Ange.....do you have.....XXXXXXX" Ange:"A little. Do you have XXXXXXX. HAS ANYTHING ARRIVED YET???" "Noooooooo. and it's 12.30~!!!!! I'm down to my LAST BAG OF COFFEE AND IT'S NEARLY FINISHED....have you got the coffee man down yet?" the sigh that sounds like we both want to collapse in a heap behind the shop till while scoring a caffeine IV drip makes us laugh.

the phonecalls to the equally harrassed manager in the other store (obviously both stores have staff nursing hangovers in equal intensity due to staff party) sounded pretty pathetic to both of us who were obviously not wanting to be there right there, right then.

It didn't help that 2 huge groups of people came in at the same time, ordering massive orders that added up to hundreds of dollars, and I had a girl on her first shift looking really lost most of the time, and clearing instead of taking things out whenever she wasn't looking like a deer in the headlights. LOST. Absolutely LOST.

I thanked my lucky stars I had a killer combo (non-hungover) opening team and had done the banking. and I thanked my lucky stars AND the Powers That Be for the boon of multi-tasking. I mean, talking on the phone to sick staff trying not to come in, suppliers who weren't coming in, and harrassed managers to swap stuff and above all, my hungover boss who wasn't picking up (but who later magically wiped up a train wreckage of people falling to pieces) ALL THE WHILE folding boxes/making desserts/brewing milk/making coffee/clearing tables/receiving stock/getting staff to swap with you so you can talk on the phone/running around in general like a headless chook IS A SKILL. of that no one can deny.

How rude of my boss not to close both stores for a day after a party where he made us all skull jagers. EW.

I had fun last night though, and finally, someone got my boss a pair of Calvins since his crack hangs out for all the world to see, and he refuses to use the belt we gave him for his birthday. (engraved on the buckle is "Say no to crack")
Listening to: After Dinner Mint- Jask- Beautiful
Posted by sway at 5:16 pm

i hope it is a clean crack! The belt buckle rocks!