I have not been abused

Just got the last 2 wisdom teeth taken out. 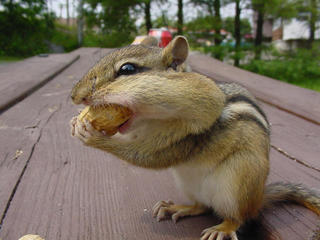 I am an oversized chipmunk.

After the anasthetic wore off was when all hell broke loose. Smartass me decided not to use painkillers, ensuring a night of interrupted sleep, and woke up to the horrifying reality that it hurt too much to swallow. Got better through the day, but as far as I know, my mouth now opens just enough for me to literally wrangle a spoon in. And I mean wrangle.

The pain's not too bad (or that could be the work of my trusty napro). The doc was initially saying "no antibios, panadol should do the trick" and after the op said "antibios AND ibuprofen"

the swelling's expected to get worse tonight and tomorrow. and apparently if the last extraction was anything to go by, I'll be bruising soon- meaning I'll look like an abused oversized chipmunk.

Listening to: Sir Mix-A-Lot- Baby Got Back ( great song I'd forgotten I had...."Oh. My. God. Becky, just look at her butt....she looks like, one of those rap guys girlfriends or something"
Posted by sway at 11:37 pm

Awww poor soul. At least you don't smoke. And you would resemble a hamster with it's cheeks stuffed full. And remember, next time if anyone offers you drugs, ACCEPT IT! With a smile :)

absinthe might help. Then again, absinthe helps many things. But your depth perception goes out the window!

i had all 4 of mine taken out at the same time...right before moving into the dorms. good times.

i had all four taken out last week and the taste of blood in my mouth still bothers me. get me some solid food!