for a certain friend

The weather's far too hot. I feel feverish even when I'm not sick...or am I? I get headaches...and I've been having fucked up dreams.

other than that, well, I guess the highlight of my day has been Jonathan Rhys Meyers. 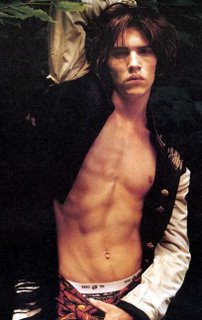 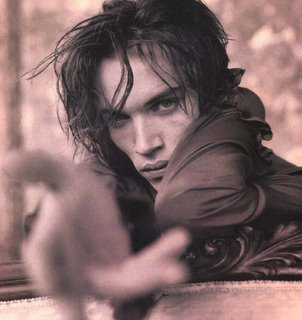 2nd only to Johnny Depp. something about boys named Johnny.

see, it's the intense look I like. The dark hair, tanned/dark/dusky skin, the light eyes that I like. the piercing stare. And I like them lean.

everyone says I like them skinny but it's not true (see above), and my friend claims the only reason why the guys have such intense stares is because they're really hungry and when they see any human being all they can think about is eating them.

well, that's one genre down. People don't understand that I don't really have "types" I like guys of all colour, shape and heights. I just have a predisposition for lean tan ones.

which brings me to cat eyes.

you know, like Tyson Beckford. perhaps his body is a little too buff, but his face. hmmmmm.

and pelvic bones. (see above, and refer to calvin klien models)

and everyone knows about my 3 minute crushes that last for the duration of a song that any random guy who can sing happens to be singing.

oh and of utmost importance- HAIR. I don't care what hairstyle you wear, so long as it suits.

So there you have it. my fetishes in one blog post.

oh. and arm veins. No bodybuilders thanks- just nice.

Like this. random guy's arm gotten off the internet. Hope whoever he is doesn't mind.

as my boss once said

and I'm hoping it holds true in this case.

I TOTALLY agree ... my ex (the death of me) fit right in that profile.
Can't I get the bad boy look without the bad boy???

Wahaha, gimme a nice, prominent nose and a pair of glasses sitting atop it. A stern face that is instantaneously transformed by a smile. And piercing eyes. Mmm.

the lead guy in "chasing liberty" was pretty hot i thought! in a very would-be-nice-to-have-you-as-a-boyfriend kinda way.

check him out. unlike you, i'm not really a fan of cat eyes ;)

marlo: what?!? I don't even get close to these magical creatures.

PS: I like piercing eyes...but in all honesty, I'm a hair girl

chalyz: the guy is so not hot.did you think he had cat eyes? nono. I mean like kyle shmid. or do you remember jonathan brandis? but I think just striking contrasts.....jared leto...you know....

see the "wouldn't it be nice" boyfriends would have the look of matthew mcfayden...that oc boy...the talkative one...even ben stiller. or the typical ABC look. can't describe!!! the not-so-kwai-but-still-kwai-at-heart kinda look.