and I mean that seriously. Indian weddings take forever. 7 days!

This is the first engagement where I know both the bride and groom, and this goes back all the way to the time when she used to live next door in college, and her boy was an ex-collegiate I knew through the same friends.

I turned up for the mhendi ceremony on Friday, and was surprised to learn that because SweetiePie and The Dictator couldn't make it and Nyla was in Dubai, Keith and I were the only ones to turn up.

Since it's a ceremony traditionally meant for the bride and her friends, it was a little strange to find myself the only female friend there. When she said small she really meant it. It was supposed to be the usual dinner crowd, Nyla, CutiePie and myself. So Keith came in lieu of Nyla. 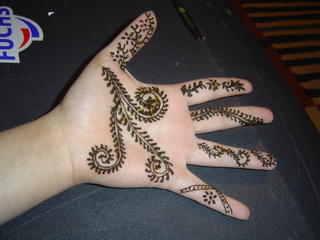 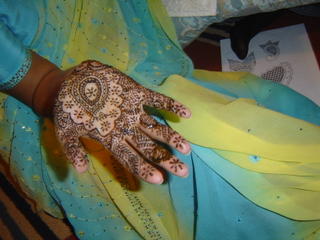 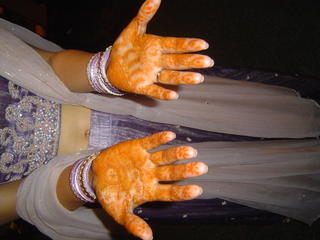 Family blessings and the exchange of presents were done then, in between mendhi applications. Dress rehearals were also held, the bride's family even buying an indian suit for the groom to try. Since no one had met their prospective in-laws 2 days prior, it was a pretty cool gathering, the bride's mother kept repeating how much like Shah Rukh Khan the groom looked. I just laughed. The groom looks nothing like Shah Rukh Khan. He's a lot better looking. Sindhi yes. SRK no.

The next day was the Hindu ceremony and party, in Glen Waverley. An Indian joint with bright pink walls. Due to the charming colour scheme, the bride decided to decorate the place with duppattas and saris in an effort to QueerEye the place, and tables arrangements were a problem. Would white candles wash out among the white tablecloth? Would flowers AND candles be too much? How would the maroon napkins go with the walls?

I hopped off work and straight onto a train, to find the groom panicking. iPods were too hi-tech, no in-cables available for the sound system. The priest lost his way and was being picked up for a 3 hour late ceremony. The saris were too heavy to be held up. It was MADNESS AND MAYHEM for 2 hours straight.

5 minutes before the guests arrived, Keith and I ran off to extremely bleachy-smelling toilets to get ready. I was still applying copious amounts of concealer (eye bags) when the party started. My hair was a mess, I was kilos heavier and looked it, I was a mess.

As it turned out, the cables were bought, the music played, the priest gave a ceremony in front of a packed crowd to much applause. The saris stayed up.

And then the music changed from Hindi to Banghra.

and of course, that's when it started to look like a Bollywood movie. 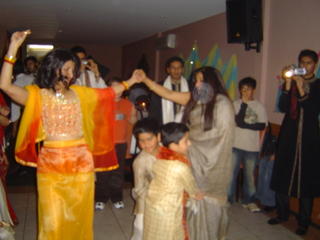 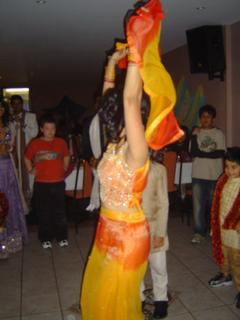 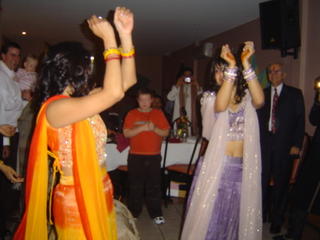 Everyone was dancing. Even the parents who looked like they were at least 60. And BOY COULD THEY DANCE.

Then again, you'll see some kids in my pics. Yeah well, the youngest one is 4.

If they start that young, you wonder why they can all dance.

Honestly. You know that scene from Bride and Prejudice where the sister makes a pointed remark about how you'll see her brother suddenly turn into an Indian MC Hammer? Well, she wasn't far wrong. Sure. No choreography here, but the dancing was Banghra all the way and everyone was dancing along. We even managed to get some "white boys" in there *cough cough* quote unquote Keith and I actually have a photo of Keith making fun of himself by "screwing a lightbulb with one hand and patting the dog with the other" but didn't want to show anyone's faces.

I guess one of the true hallmarks of the night though, was watching the groom actually take to the floor. As he said in his speech "If she can make me actually dance to this bloody Banghra music, (he hates Banghra music, much less dance to it) then I guess she's it for the rest of my life"

In the end, CutiePie, The Dictator, Keith and I all ended up going home at 1am, long after the party ended, helping everyone remove stuff.

So there it goes, The first of my really close friends on their way to getting married.
Posted by sway at 9:54 pm