I don't eat kittens for lunch

Kavi's friend Cass has a film in the Canon short film competition and I'd place a guess that she has a pretty damn good chance of winning since she's good and more Eric Khoo/Jack Neo while the other better films are more Wong Kar Wai.

If you're interested, her's is film11, "Story of Hong". and I'd also recommend Dusk.

Story of Hong is extremely "I Not Stupid" but in a darker Eric Khoo-ish kind of way. And it's reminicent of many many Singaporean childhoods if I say so myself. I can certainly see my childhood played before my eyes. And the temple they used is also the temple my maternal grandparents' ashes are housed in, the same temple my parents have booked lots for themselves. So yes, this is Singapura-bilia to the max for me.

Dusk is much more Wong Kar-Wai mood piece with a twist of Singapore added in. And I think that's why I liked it so much more than the other WKW-wannabe films. It didn't try to clone, but you can tell the influence, from the way people speak in different languages and yet seem to understand each other, right down to the Chris Doyle lighting. Also, plus points for a reasonably cute beng. And everyone knows about my soft spot for bengs.

Also, in my final semester at school, I read that collectivistic societies always think about others and the impact one's actions have on others. This was certainly shown in many films, especially in Dusk "why are jumping now? It's a bad time. When there are so many people. You have to jump when there is no one to see you- how do you think they would feel to see a dead body" along with praticalities- like jumping from the highest HDB...unlike in individualistic culture where people jump off things like the Golden Gate Bridge in the middle of the day because hell, they might as well go off with a bang, and since they couldn't get attention when they're alive, why not when they're dead.

Strange films got in, such as "321" where the supposedly Malay prostitute looks extremely Chinese-Eurasian, or maybe Chindian- and what the hell was she doing in a/an (ill fitting) cheongsam when she should be in a baju or kebaya for authenticity? and that RI movie about racism, while good for raising awareness, made me stop halfway. Hackneyed is no good, and the LOOK! I HAVE ADOBE PREMIER EFFECTS! treatment was not good. It looked like something the MOE pulls out to warn us about drug taking. BAH. and that beating up sequenece? rofl. I swear it only got through because, well, it was RI, and you don't refuse the future leaders of tomorrow because you could end up bankrupt, or in exile.

and I have a question for you Singapore film-makers out there. Sure you can have the WKW influence all you want, as shown in Dusk, this can be a good thing. But one thing I find strangely puzzling is the Cantonese. Sure I'm Cantonese by default (my dad) but there aren't all that many of us, and even fewer of us who speak Canto anymore. Why not Hokkien? Sure it'd have been fine for a Malaysian-Chinese film but for a Singaporean-Chinese film...it was a little....off. Or even better, why were they no Nonya matriarchs? I would have loved a Bibik or two.

and in an even bigger show of racism, where the hell were the other non-Chinese entries? Were there simply no contestants? (plausible when you think about it since Chinese are the 75% majority)

EDIT: 4444 has been tomorrowed, and I took a look at it. It's a very short short film, but very cute nonetheless

(for the non-Chinese among us) "4" is traditionally seen as the number representing death given the similar intonations in almost all Chinese dialects, and even a homonym in Cantonese.

***
Well, you know how I've always maintained that I don't eat kittens for lunch, but babies taste pretty good?

Well, here's more information for the health concious among you. 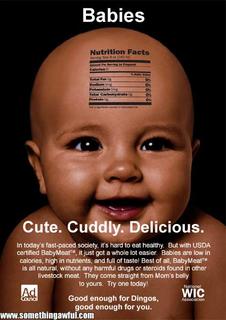 Don't look at me.

Look fern, I love you, and I do like Travis Fimmel, but purple penises are a big no no.

oh yeah. I also updated my profile, although the scarf question proves I'm no less neurotic.

Listening to: Tori Amos- Sleeps with Butterflies
Posted by sway at 1:38 pm

Mooooooo... I gave you a choice, remember???