Daddy was a rolling stone

In case any of you have been wondering where I've died to (literal translation from Mando) I've been doing strange 50 hour weeks at work.

Whatever the case, my insatiable need to whack customers over the head is growing ever stronger. *sighs*

I seem to be making a habit of turning up to really big gigs sans a scrap of makeup. I mean sure, I have concealer (and only concealer!) on but that's it. This has got to stop. Very tak glam, seriously un-classy. Especially when I'm not getting any younger and my eyebags are PERMANENT.

just came back from my friend's wedding reception. Party favours include a personalised bottle of wine and wedding cake in little chinese takeaway boxes. The Tibetan wedding dress was mucho cool- apparently her mother-in-law got it from the same tailor who makes the Dalai Lama's and the royal family's clothes. And the stripy apron is only worn when a woman gets married. How friggin cool is that. Unfortunately, I didn't take my camera along as I finished work at 11.30pm so I was travelling light.

It's a good thing considering I came from shift from hell, changed in the storeroom and I'm pretty sure I have smelly feet from changing from sweaty sneakers into heels. I have no makeup on and no I didn't do my hair either. I kinda just pulled it down from the high pony and hoped for the best.

Lisa look stunning in a high-cut tailored black cheongsam with gold dragons and she'd straightened her hair and pulled her fringe straight down so she looked more "Oriental". Very very hot. and everyone else was really stunning too. Nat was wearing a lace halter-neck Wayne Cooper dress, Hang was wearing an Alannah Hill skirt, Andy was in a SUIT, WhiteTrash was in a maroon lace top that looked stunning (origins unidentifiable) and Lindy had the hottest halter on.

The music was seriously retro but it was kinda fun, and the place had Pollock inspired installations, Versace furniture, those wire globes with tiny lights, and Philippe Starck mirrors. You get the idea- very organic, very New Design. I betcha Andy-Architecture was in design heaven.

It seems that I may be leaving too. Gawd that sucks.

A third cousin has turned up on Melbourne's shores while I have to leave. I grew up with this one, knocked out my 2 front teeth on his kitchen chair, went for art classes in his father's car- oldies playing, I beheaded GI Joes with him, watched Bionic 6, Teenage Mutant Ninja Turtles and Gummi Bears with him, and as we got older, we drifted, especially after I left for Australia.

He used to uncomfortable with my affection even then, now, he'll simply have to learn that over here, not only do we lean on each other, hug and all that, we also kiss. HA. He'll be so traumatised. Poor baby.

I've been reading his friendster testimonials and it's pretty funny how he's a retro king who hates hip hop and r&b, while I'm the 1st princess of dancing to anything but retro and most Top40 tunes. (well, ok. Everything except Grease. and 80s don't count. EVERYONE CAN DANCE TO GIRLS JUST WANT TO HAVE FUN!) I can listen to retro quite a bit (as my playlist will attest to) but how on earth do you dance to...say...Play That Funky Music, or the Charlie's Angel's Theme song? Or Jesse McCartney? huh? huh? huh?

Don't start that square root dance shit on me. I'll kick you with my 10cm (about 4inch) stilettos. don't believe I own a pair? (I just wore them tonight)

Gerri's having a party for NO REASON AT ALL. I was considering telling her to consider the theme Mad Hatters Tea Party but I think she might have taken offense, so it's now Saints and Sinners (Pimps, Sluts and Prostitutes). All colleagues are invited. (the rest of you, it's personal invite only- if we think you aren't pimpin' and sportin' enough, chances are you won't be invited) Punishments will be meted out at the door should you fail the dress code. Alternatively, we'll just make you strip to your underwear. You WILL become as slutty as the rest of us.

The rest of you can make it to the Long Room when I settle on a date. I'll be dressed in a blazing red dress so you guys will be forced to dress up too. There's a dress code at the door anyway. 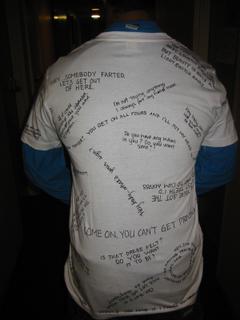 Or the Peter Pan theme party. The number of boys who turned up as Wendy was very disturbing. (albiet very hairy-legged Wendies) Our college was big on cross-dressing and even very very straight guys used to or were made to do it for some reason or another (this included charity). Some guys, you just know will NEVER be able to make it as trannies. Like good old Al-fro, or AIDS while others, you just wonder about. It didn't help we had a drag queen named Heidi-Ho in our midst.

It was all about getting in touch with their feminine side. And besides. We were (proudly) the most rainbow-flag waving college, many of our office bearers and even presidents being openly gay.

*sighs* sometimes, I miss those old old times, until I remember our Phantom Shitter. That was feral.

WAS dancing to: Aerosmith- Walk This Way (literally walking. oh god. how embarrassing. hope the photographer didn't catch me)
Posted by sway at 2:25 am