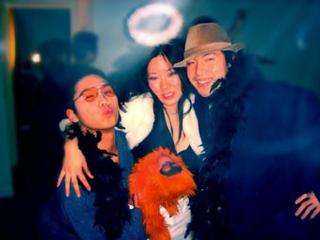 as soon as I get pics, I promise I'll post them up, but in the meantime, saints and sinners was a blast.

Good thing I don't intend to become the next Natasha Stott-Despoja or my career is ruined!

In the meantime. I'm having a really bad period. And it sucks BIG TIME.

I mean, as my friend was saying this morning, imagine what it'd be like having to bleed from your penis every month. and it feels like your uterus (or in guys' cases, their ball sacs) is about to drop (or bleed) right out. and you can feel it. slowly bleeding.

esp. if you're a girl like me who has crazy ass periods that are incredibly heavy. AND puts on 4kg per month. (and loses it right after)

and it's spoiling the party because you spend half of it curled in a ball already changed into work clothes for the next day and you look like a...stuffed sausage because of the additional 4kg in you normally ok-fitting tight white skirt.

RANDOM FACT: "brinjal" is an Indian word, used in both north and south India! I always thought it was Malay!
Posted by sway at 4:49 pm

Hello. I just watched the dance of the thousand hand bodhisattva. Very cool. Like synchronised swimming but without the water.

Boo to periods I say.
Kissthewitch

Peishan here. Looking forward to those pics - party looks like a ton of fun.

Heh, thanks for the link, but it's wrong - supposed to be journal.peishan.org. Chicken mama eh? Haha, I guess I'll just have to continue living with this nick. Blast Yiling!

Still think you looked pretty hot...
But men can never understand the joy of periods... I have stopped trying.

Although they say child birth is like trying to extend your lower lip to fit over your head.

I digress... I cant even remember what I exactly wanted to say...

you went to THE saints and sinners ball?!?!