freefalling is such a rush

like most eventful days, this one had an eventful start.
At quite literally the crack of dawn, I woke up to the infernal sound of birds tweeting and my alarm clock playing something I now don't remember but was nonetheless annoying. As I sat at the local Baker's Delight waiting for my friends, I chomped on several bread rolls and pondered on whether I could possibly wake up to try Brown's one day.

Then they arrived. 3 crazy Columbians (2 of whom were hung over and had only slept 4 hours) and me, packed into a jalopy that would take us to our date with destiny. Needless to say, like all epic adventures, our jalopy ran into trouble by 8am. 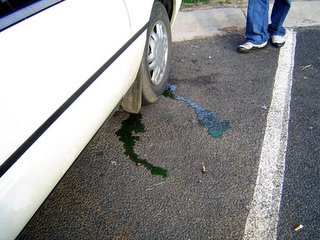 yes, that is green shit coming out. It's not as scary as it seems....(that's right, it's not radioactive slime) it's just the coolant. Our car had overheated...it seems out radiator cap seal was broken.

Nonetheless, we made it to Euroa in one piece, and on time too!

Once there, I spied the Cessna plane that would take us up to over 10 000ft- a single propeller plane I'd once taken a ride in...and that last ride was over the Grand Canyon in extreme tubulence. So bad that even our pilot threw up at the end of it all.

Thankfully, it was Euroa, where the weather is almost always excellent and the plane ride was really uneventful. when they flung open the door, cool air blasted us immediately and I was instructed to swing my legs over the edge of the plane as we'd be taught on ground, and as "WHAT THE FUCK AM I DOING HERE" passed through my mind while staring at what looked like minature models of real buildings complete with stick trees loomed 10 000ft below, I was unceremoniously flung out the plane.

Freefalling at a ridiculous rate, we did a somersault where I saw the back of the plane fall away, and it felt like swimming, only lighter. a few seconds of falling strrrraight down later, we were stabilised (as much as stabilised when falling at terminal velocity can be) and a few seconds after that the parachute was pulled and we were gliding towards the drop zone.

Scott decided I was one of the "cool calm and collected cool cats" and actually let me work the parachute for one or two 360 turns (he didn't let go of course) while I watched cars still look like little toy ones drive by.

As we touched down, I realised that I'd skydived more than 6000ft in less than a minute....and that I'd broken 2 of my nails from the sheer velocity of zooming towards earth at up to 220kmph. you gotta love the rush.

After all 4 of us completed our jumps, we collected DVDs that my friends had ordered (watching your cheeks flap is really quite amusing) and hopped into our bung car looking for a service station. We fixed the seal cap, drove to Shepparton, and realised that the car was still overheating.

We stopped for lunch, hoping that the car would cool down, but after about 15km, we had to stop by the roadside in 36 degree heat to let the car cool down. As Jose unscrewed the cap, the water literally geysered out, and all of us ran for cover and let the car rest for another half an hour.

It didn't help. a few minutes and 3km later, we drew to a stop at RACV Nagambie where we asked for help. Apparently the car would take 3 days to fix, not including new years and we were stranded in Nagambie while RACV searched for a car in the vicinity for us.

While waiting for an answer, we sat at the local supermarket, reading old fashioned country ads on the community noticeboard including this one 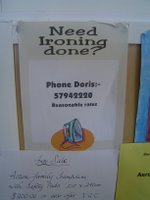 and watch the sun set in the little town of Nagambie 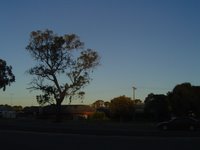 4 hours later, they found one in a town 20km away and rang a taxi from that town to drive up AND down again, when we drove into a garage. It was about 9pm.

A few Juan Pablo Montoya jokes later, we were in another jalopy. But this one had AIR!

Yessss.........all we needed after a swelteringly hot day. AIR CONDITIONING.

There was no highway radio, no Triple J, but as sunset faded to dusk, and dusk into twilight, and twilight finally into darkness, we were still chattering on and our car was still going strong.

I arrived home at 11.30pm, hot, sticky, sweaty but happy. Not bad considering I'd thrown myself out of a perfectly good plane only 12 hours before.