here's a fantastic way of pushing your boyfriend into cheating-
turn yourself into a paranoid bitch on top of everything else! 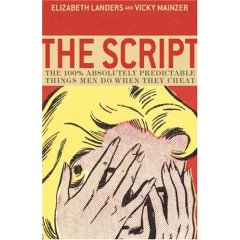 oh yes. The 100% absolutely predictable things men do when they cheat.

I was happily minding my own business (walking to the cookery section) when the pop art cover caught my eye. Lo behold! It was in the Top 10 Self Help Bestseller List! I'll admit to having a huge bias against self help* although the occassional one will get through my defences and I'll actually sit down and read it**, and the very occasional one I will actually like***.

I was sucked in by the cover, until I read the blurb. and then I read some of the telltale signs as listed in the contents page. "He shakes his head disapprovingly at other men who philander"

and if he weren't cheating he'd nod his head approvingly? I mean, that's like saying only lactose intolerant people are against milk products in their diet when really, so are the vegans and the yuppie health freaks. (that wasn't meant to be serious)

I'm not saying ALL men are going to shake their heads disapprovingly when they hear of such a situation when in the proximity of their girlfriends, but I'd bet good money that a sizeable amount would (and the few stupid ones who didn't would soon realise that they were meant to).

I then got sucked into "Toxic People" because it genuinely interested me, which I liked (if I were Toxic to anyone, it'd be because I was an Emotional Refridgerator) and yes, one man's friend is another man's toxic person- one whole chapter spelling it out to people with an IQ of 5. until I spied the title "Rules II" (what! You mean it SPAWNED??!!??)

I moved on to my rightful shelf (cookery) before walking out...and spying....a numerology book. The meaning of my life in numbers! oooohhhhhh. the number 11 keeps recurring in my birthdate...so I'm an idealistic nut. oh the joys of sharing a birthday with Benito Mussollini and having 2 "golden couple" marriages fail when the vows were made on my birthday (Princess Diana and Prince Charles, Brad Pitt and Jennifer Aniston) I guess it's all coming up roses in regards to my love life hey?

Listening to: Shirley Bassey- Where Do I Begin [Hotel Flores Vol. 3] (friggin fantastic- THANKS PAM!)

*something to do with the fact my father tried to force me to read How To Win Friends And Influence People at somewhere between the ages of 7 and 9, and my mum trying to get me to read 7 Habits of Highly Effective People when I was....11? It didn't help that the whole Chicken Soup for The Soul rage was all abuzz. and no my parents weren't being as delusional as you think they were, I was a freak of a child, and I'd read LOTR and Shakespeare by 9, and I was well into their encyclopedias by the time I was 11...I think I was so bored once I started reading the dictionary...but stopped at the letter A because some of those words were just plain...useless. If I had a child like me, I'd be frightened. My parents were cool about it and even went on to buy me things like 'The Unabridged Version of the Grimm Brothers Fairy Tales' (very traumatising, really should have a PG rating) and Bram Stroker's Dracula...and my dad even introduced me to the now infamous Holy Blood, Holy Grail by the time I was 9 or 10. It was astounding.

** my parents gave me The Rules at 14. I threw the book into the trash. They were appalled. So was I. [to be fair, I don't think they knew what was in it]

Astonishing. Christmas eve I wrote a post on the subjects of being absorbed with the Encyclopedia and Dictionary while in grade school. My parents did the same thing. Except I had Gulag Archipelago (Aleksandr Solzhenitsyn), Centennial (michner), Snows of Kilamanjaro (hemingway) and Brothers Karamazov (Dostoyevsky) all between the ages of 8 and 11.

It was a pleasure to stumble upon this post via reflexive disorder. I am looking forward to reading more of your posts.

miss you too babe